Postcards from Paris (by Jo)

I was so pleased when Elaine chose Willy's book for our next project. I thought the combination of the black card and the bright inks was stunning. I chose a black background for my book and wanted to use bold colours too but wanted to avoid copying Willy's colours. With hindsight I would maybe not have chosen Distress Inks and maybe gone for sizzling colours instead but these were the inks that were in my head at the time and they do seem to suit the subject matter. I chose Broken China, Pine Needles and Dusty Concord. 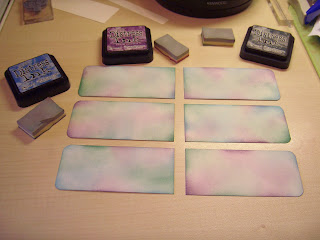 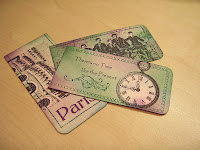 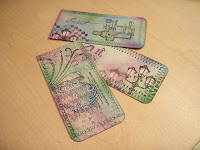 It was only after I inked all the tags that I realised just how many surfaces I'd be stamping on. I'd chosen Elusive Images' Paris Memories plate as I thought it was my best chance of having a large number of stamps on one theme at my disposal. Even so, I found I had to introduce other stamps so I didn't have to repeat too many.
I used some stitch stamps from HOTP and also some sequin waste for backgrounds. Other images came from Paperartsy, Prima, The Artstic Stamper, Butterfly Kisses, Craft Stamper and Dimension Fourth. 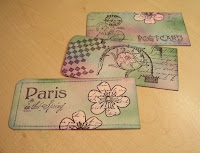 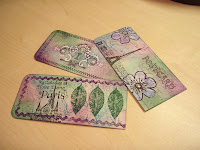 I really liked the bleaching on Willy's flags too and used some bleaching on every tag. The flower worked particularly well so I did use that as a recurring motif, with Hero Arts Old French Script stamped over it. I discovered what Willy meant about the effects of the bleach over different colours. 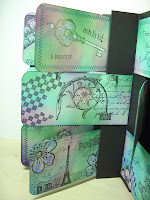 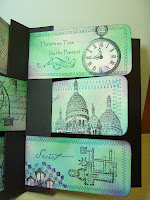 Putting the book together proved quite simple considering the great effect the flags produce. It was hard to get a photo of the book showing how the tags move but I hope these give you the flavour of how the pages look.


Finally, I decided to depart from Willy's project when doing the cover. I'd been very taken with the cover of Penny Bearcroft's Fuerteventura journal and wanted to produce a collage style cover along similar lines. I also wanted to have a crack at that style as I'm planning to produce my own holiday journal in just a few weeks' time. For my cover I printed some words over a panel from Artylicious' Decadent Brocade CD. This was mounted over some Cuttlebug embossed card, with some die cuts from the same Cuttlebug set (including the tag which was a piece of paper I'd been using to try out some Cosmic Shimmer and Crafty Notions mica sprays). The lamp image was actually my first bleaching practice piece. The key is a ScrapFX laser cut chippie, which had a thin coat of Viva Terra to give it a bit of texture then was lightly swiped with gold ink. The number tag is made with a stamp I love but don't often have the opportunity to use. It is from a US manufacturer. Probably Purple Onion. These bits are held together with an Idea-ology ball chain. 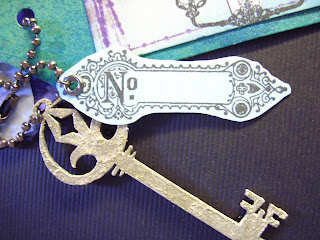 So this is the finished cover. It doesn't look very square as it is standing up. So, to use Judith's expression, it's decidedly 'on the wonk'. Thanks for nominating this challenge, Elaine. I really enjoyed it. 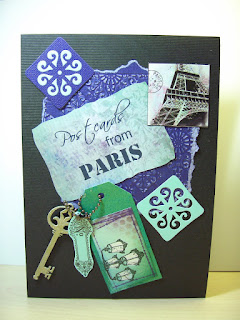 PS My apologies for the arrangement of pics on this post. I look forward to the day when what you see in the preview pane in Blogger is what you see on the page after you've published!

PPS I have just found out about Blogger's new post editor. It might be too late for this post but hopefully my next one will look much more sensible!
Posted by Jo at 08:16

Wow Jo, another brilliant project from you. The colours you have chosen are gorgeous and I love how you've finished the flags off with a border. Your eye for detail is fantastic and you've mixed the images so well.

Well done on finishing first again this month. Some of us (ahem, me!) were total none starters last month but I'm right behind you this time and will post in a few days.

excellent take on that project...must give it a go myself.Thank you for the inspiration.

What a lovely finished project Jo. I love the colours that you have chosen, they blend together very well, and provide a beautiful backdrop for all of the gorgeous images that you have used. Well done for finishing and posting.
Your front cover is very eye-catching, with so much to look at. Another great start from you this month, way to go, Jo!! Judith xx

this is really lovely Jo - love the colours you have used.
glad blogger drives someone else crazy, thought it was just me being idiotic!

Well done with this flag book and as you say a lot of surfaces need stamping. One of these is on my list to do but not even started yet.

Another great project Jo, I am glad you enjoyed my choice of the flag book so much!! As the others have said, the colouring is gorgeous, lovely choice of palette. You've used an incredibale number of stamps, but they do work together so well and they are stamped so crisply. It was good to be able to see the impact of the bleaching in close up, it is really effective, I think I may be tempted to give it a try myself, I was nervous of trying I must confess.

As you know I am very behind the rest of you thanks to my water spillage ruining my coloured flags!! No doubt I will be the team's tortoise mascot again!!

Wow, Jo! That is stunning!

This a stunning - I love the colour scheme - very chic - and it allows the stamping to really shine through. Great cover.

I agree with all of the above!... love the colours..love it all..

This is lovely the colours work so well together and the images are great.All in all a stunning project. x ChrisB

This is gorgeous, Jo, and I think those inks and colours are perfect for it.

More stunning work! Love it and since Paris is my favourite place, it couldn't be better.

Love the colours on this Jo and the Steampunk influence.