The Bluebell Walk (posted by Jo) 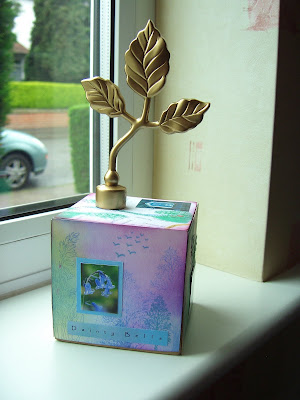 Anyone who knows me is probably thoroughly bored by now of hearing me banging on about Sheffield. And if you’ve read my post on my other blog you may know that each year around this time I embark on the Sheffield Round Walk. It’s a 14 mile walk around the parks and green 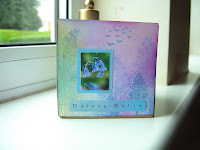 spaces of Sheffield and I go at this time of year because of the bluebells. Granted the best bluebells are actually off the Round Walk route but it’s a good enough excuse for me. I’ve started to scrap or journal the walk a couple of times but never got it finished so I thought this month’s project was a good chance to encapsulate my special ritual on 5 pieces of card. 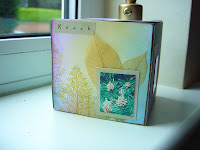 It was hard trying to choose a tiny few photos for my cube so in the end I chose some from my collection that just fitted a woodland theme rather than this walk specifically. I was worried that otherwise the sides of the cube wouldn’t hang together so I chose the Clarity tree stamps to create a unifying background for each face. I wanted to use bold bright colours and also to mix colours on each face. I wasn’t too happy with the blending but since I made these I have picked up some tips from Judith after seeing her beautiful inking. The top is simply a section of the route map and a photo of the walk waymarker with its distinctive acorn. 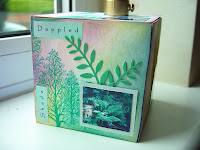 My hardware on the top is..... a curtain rail finial! I was thrilled with this find but it would have been easier to use if had been symmetrical. 100 bonus points to Alan who guessed what it was 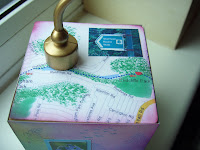 from the last photo and 1000 bonus points to him for cutting these cubes for us. It seemed criminal to cover them up and I was planning to leave some wood showing in keeping with the theme. But my panels mysteriously changed shape after I cut them. Maybe the craft gremlins were at work. 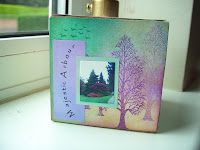 Jo this is lovely.. one of my favourite things is a walk in a bluebell wood...
Sue B x

Stunning! Such beautiful colours and I love the trees and your photos

Jo, this is a realy lovely project and I love the way you have chosen a theme that is special to you. The colouring is lovely and delicate and those tree stanps work so well for the theme, especailly with the added leaf embellishments and your curtain finial fitting. Plus the great news for you is that it is bluebell time once again!!

Well done for getting this finished - just me to go know - I might get there by Christmas!

I love bluebells Jo, and the soft colours that you have chosen seem to capture the feeling of blubells in the woods perfectly. It is lovely that you have a personal theme to your cube. The words on the different faces, coupled with the majestic trees are fabulous. I really like the mix of photos and soft backgrounds. Your trail on the top is a great addition. Your colour blending is lovely, and what a pretty shape your finial is on the top. Judith xx

How delicate and beautiful is your cube Jo! I love the theme and your map panel for the top is a wonderful idea to pull the whole thing together. The colours are really pretty and your photos are so lovely. What a perfect way to display them!

The curtain rail filial was the perfect piece to compliment the theme you had chosen too.

Well done for posting today as I know you didn't expect to have it finished before weekend but it would have been worth waiting for.

Jo - this is beautiful. I love the beautiful soft colours you have used, and the whole unifying them. The photography work is excellent as well.
Love
Valxx

Another wonderful cube - you have all been very inventive with your ideas. thanks so much for sharing these projects with us.

Wonderful way to "scrapbook" your annual walks and memories. It is truly personal and a very attractive piece.

Love the colours on this Jo. It's a beautiful piece.
I think all you girls are making amazing pieces!

Great piece of work, love the idea, especially as I love bluebells as well. The whole thing looks fabulous